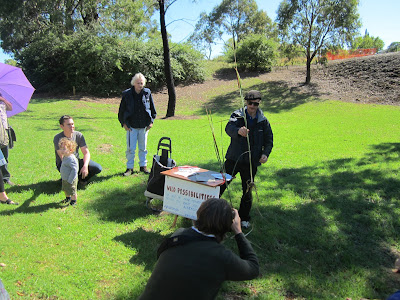 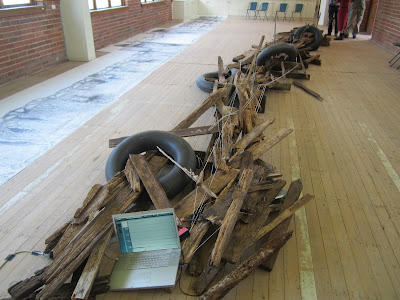 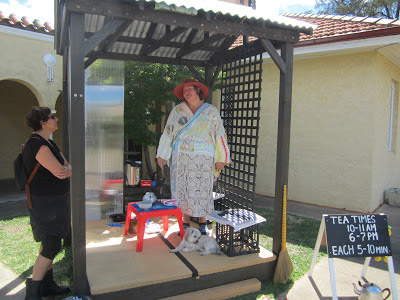 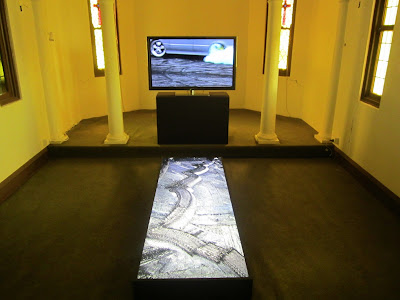 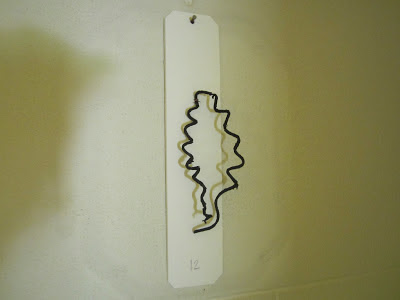 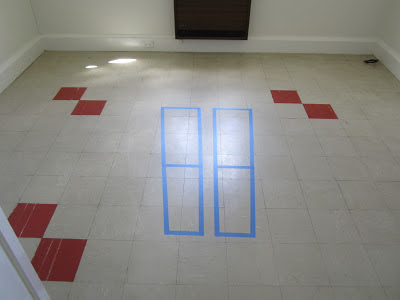 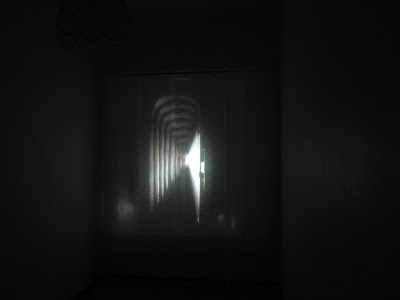 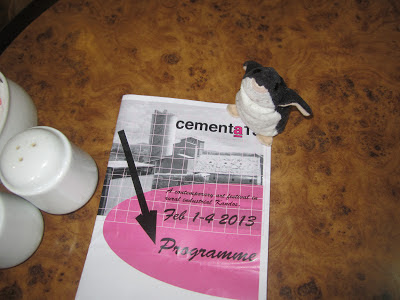 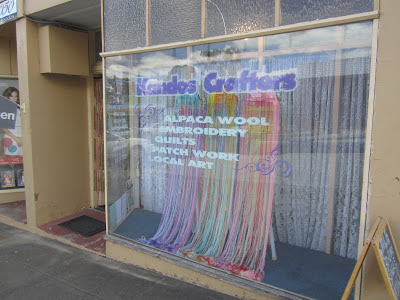 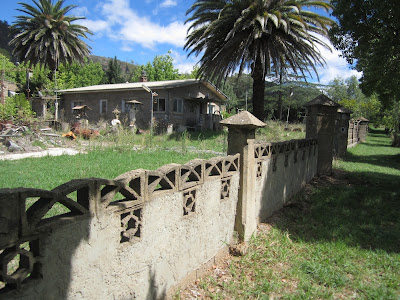 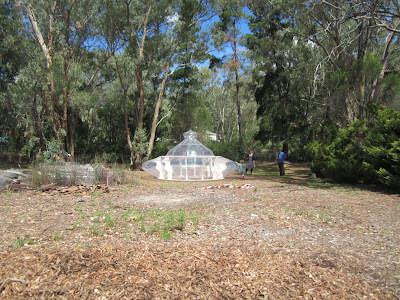 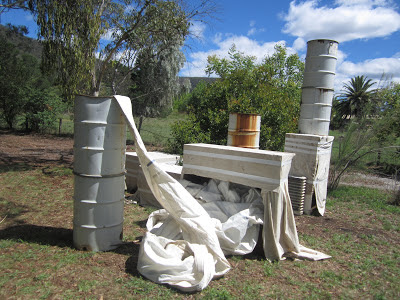 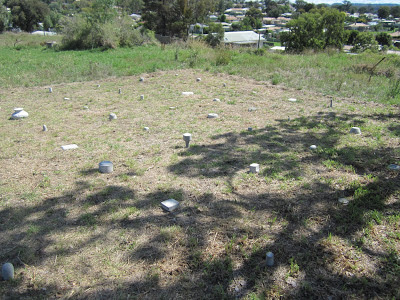 After my imac turned to toast I thought I had lost everything, lost all of my Cementa notes but after searching high and low finally found all of my photos and was able to start again.

Day 2 was a complete wash out for me, I was rearing to go come Day 3.

‘Wild Possibilities, or How to Make Money By Selling You What You Own Already’ by Diego Bonetto was an eye opener. He is the ‘Weed Master’ after all, I’d heard about him around the traps and was pretty excited about seeing him in action, and yes I think we all learned something new that morning.

After a quick coffee at Down the Track Café got a lift up to the St Dominics Buidings to see ‘Salvage 2, Part 1’ salvage timbers, original soundtrack, electrical wiring, stitched, speakers and sound system, inner tubes by Alison Clouston and Boyd. This work must have been exhuasting to create, it was incredibly beautiful with it’s stitch work and embedded sounds, it also seemed to represent to me me a deep sadness for loss of life.

‘Bushman’s Recall’ large scale graphite rubbing by Sue Pedley and Virginia Hilyard is another exhaustingly big work, a very long rubbing of the fence at Bushman’s House built by Stan Grudzien. It opens up to reveal it’s entire cemented life, laid out for all to gaze upon it.

‘Wabi-sabi Tea in Kandos’, Sarah Goffman’s tea pavillion, she is famous for it, wearing a lovely kimono made entirely from Australian tea towels, Sarah served us tea in a most civilized manner and I managed to score the last iced vo-vo with cream on top and I was pretty happy with that.

‘The Chapel of Rubber’ mixed media installation by Starrs and Cmielewski is a wild expose on the common place passtime of rev heads, it’s a shrine to rubber, driven into the ground by fast petrol guzzling cars and trucks. Apparently it’s also an annual event in the towns calendar. Surrounding this work is the ‘Fourteen relics from the Kandos Burnout Track’ with it’s church setting in The Presbytery I found it strangely comforting.

More curious wonder in ‘Untitled’ photographs, tape and cardboard by William Seeto, the note stuck to the door clearly says ‘If you stand at the doorway and look through a camera viewfinder, the tapework perspective changes and the lines will square up’ and I took a photo and exactly that happened, a completely different view as you look at it with your own eyes, love it.

‘Openings’ the second installation work by Sarah Breen Lovett, this video is exquisite, I found myself concentrating on my own breathing while watching this. Her work is refreshing and quite powerful as it seems to make the viewer more relaxed, it’s quiet and a perfect tonic from the noisy outside world.

A walk back up to town and came across the wonderfully funny David Capra with this genormous long bit of wood with a hand at the other end, he was shaking peoples hands all over the main street. I had to shake it and somehow video him at the same time. David is one of those rare talents, wildly funny and seriously entertaining oh and a genius too.

I have to give a mention to Cigdem Aydemir and her ‘Muslim Hair Drying’ as I missed her performance and could only gaze on the window display. My timing is flawed but my heart was there. Cigdem’s work is beautifully sensitive but political charged, although I’m a complete ignoramis when it comes to cultural politics but I do get the struggle of women being given the basic rights of equal opportunites here or anywhere in the world.

Digesting all of this wonderful festival has been a task but a good task, it’s also something that I didn’t want to rush into and complete in a short time. The Cementa Festival needs to be remembered and thought of constantly so in my attempt at delaying my posts, spreading them over a bit of time has been the best way for me to give people time to think about it all.

‘and’ by Sarah Nolan started out in life as an ordinary knitted coat hanger minding it’s own buisness and ending up in an almost crocheted and knitted remnant version of Liberace or some gorgeous show girl. Have just read that the colours of this piece reference the colour system used for Mills and Boon book covers, how strange that these particular colours can seem romantic, I feel they are a little to soft for that, but not saying the work is inadequate in any way. Sarah’s work allows the threads to dance in her presence and become more than any knitted coat hanger could ever be.

Off for a walk in the afternoon sun and a bit of a long walk too.

‘Dunn’s Castle’ by Artists in Transit-Ro Murray and Susie Williams created a folly in a local’s backyard, using objects and remnant materials that could have been used in conjuction with the now closed cement works. It’s a white monster looming from the landscape with rust blood dripping down it’s throat. It was placed in it’s own surreal landscape with the neighbouring Bushman’s Recall and a little foray into Sci-fi up the back.

Well not so much as a little foray, ‘Weatherman UFOlogy’ vacuum formed acrylic perspex by Jacquelene Drinkall is bloody fantastic, I walked up to the backyard, avoided the ant’s nest and came across this spacey see through space craft. I hear it had taken 7 years in the making and well worth it. If only I had 2 good legs I would have climbed into it, but it was a bit of a hot day for that kind of sillyness, but wow I really loved that piece. It definitely had a commanding appearance about it, the kids loved it, but it was also had this ‘I want one in my backyard’ vision which hit me in the face when I first laid eyes on it.

Connie Anthes-serenly placed on top of a small hill overlooking the township. A sensitive collection of household objects cast in cement pay homage to the now closed livelyhood of the town. Although these works are placed in a grid like formation, they seem to represent a far more reaching relationship to the landscape within the rural setting. Some of these pieces are beautiful, some others have been cracked but I still take them in as they are like delicate objects and reflect on their once important existence. I found myself sitting on the grass between some of the objects trying to imagine the life of the copied objects. Reflecting back to what was going on in my mother’s kitchen, seeing objects that I haven’t seen for some time, a bit of a time capsule.

To end a wonderful afternoon I had the pleasure of hearing the most wonderful rendition of a Scottish song, sung in heart felt serenity by the lovely Liam Benson. His dusk performance for ‘Ode to the Glossy Black Cockatoo’. Such strength, such power, such a beautiful voice, and a song close to his mother’s heart.