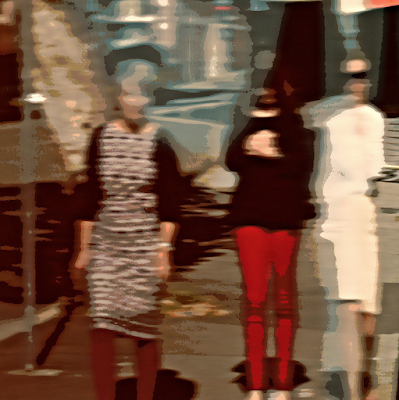 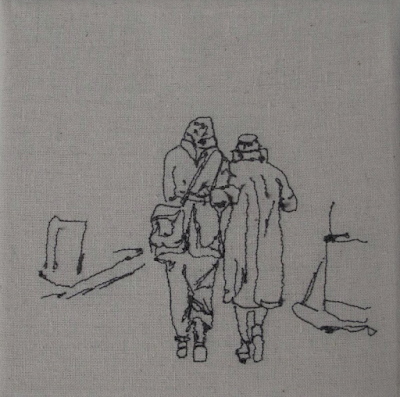 A review of the many exhibitions I’ve seen recently.
Although the greater populace of Newcastle are pretty much disinterested in the art scene going on about them this doesn’t deter the enclave of artists here producing and exhibiting quality work.  And the past couple of weeks I’ve seen so many exhibitions of high quality that it would be disappointing not to mention them.

My fortnight began on Friday 17th April when I attended the opening of “Insightful” at Four Point Gallery.  Cheridan Chard delves into the quirky side of photography making images that show strength in composition.  That mundane photos of everyday life become twisted and obscure via reflection or using opaque material as filters is exceptional.  Sticking to photographs of people and the urban environment yields a unique street photographer for the old Newy.

That same weekend I took a wander through the East end of town with a couple of the non-arty types of Newcastle so art viewing was limited.  I peeked through the window of Curve Gallery to see a menagerie of wire and hear a few disgruntled comments from my pals.  I’ll come back to this exhibition later.  Then I managed to convince the philistines to visit The Lock-up and become familiar with the layout of an old jail.  I let them peruse while I admired the work on display.  This exhibition titled “A Second Shadow, Prelude and Trail” brought together a variety of works with a conceptual base requiring lengthy viewing.  Needless to say I did not get the luxury of time however I couldn’t help being attracted to the paintings of South Coast artist Mignon Steele who builds layers utilising existing texture so a lumpy abstracted looseness is the result.  My art viewing was then unfortunately cut short.

Not to be deterred I again ventured out Friday to see the last days of two great shows.  Back to Back Gallery was hosting “Fraternity Futility Hope” where art works were small and related to The Great War.  The gallery was filled with poignant pieces such as the stitched line drawings by fibre artist Tanya Matas who is able to capture hope and sorrow in the image.  I then dashed off to Art Systems Wickham where Shelagh Lummis was exhibiting “Of mist and illusion”.  The landscape of New Zealand provided the inspiration for these moody and lusciously painted oils.  Some had a dreamlike feel as of underwater worlds.  A favourite for me though was “Go with the flow” where the landscape was built up with broad strokes of strong colour completely succeeding in convincing the viewer of the presence of the scene.

Saturday saw the opening of Nanshe’s 3rd Birthday Exhibition which continues until May 23rd.  I’m an exhibitor in this show so am reluctant to comment on the overall feel however I will say that Barb’s gallery has that quality of down-to-earthiness which seems to reach out to those Novocastrians out there that still want original art but are just not into the art scene.  From Nanshe I crossed the road to see an exhibition titled “Sculptured Out” at what I would say is Newcastle’s newest gallery, Gallery 139.  I recognised instantly the abstracted mono types of Helene Leane.  Flynn Doran’s geometrical steel structures wonderfully brought the industrial into the gallery.  His wall mounted assemblages made of painted steel rod proved very successful.  This exhibition continues until 9th May.

I then went back to Curve Gallery to see “Wind Shear” by Joanna O’Toole.  What I saw through the window as a menagerie of wire a week before became on closer inspection a gust of wind harbouring an abundance of sculptured birds in flight.  The hours of labour that went in to manipulate the fine wire is astounding.  This exhibition continues until Saturday 9th May.

And so that concluded my fortnight of exceptional art watching.  I must say I’ve missed out on Ben Kenning’s exhibition and I haven’t been to Timeless Textiles or CStudios in a while.  Oh the many galleries of Newcastle.  Aren’t we lucky!  And I don’t say that facetiously.