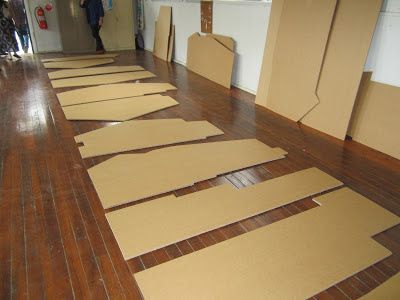 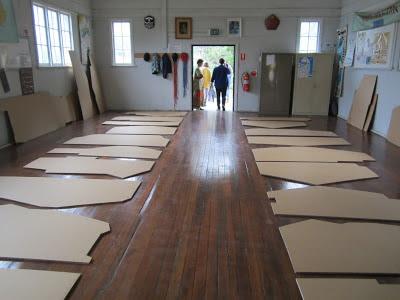 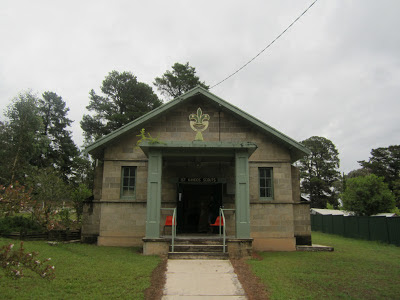 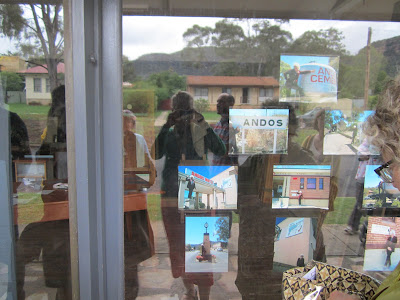 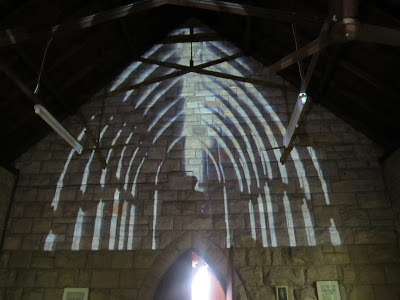 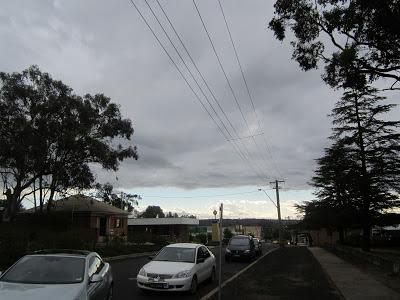 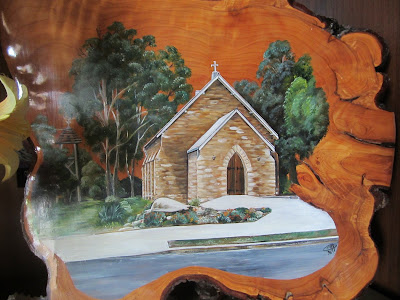 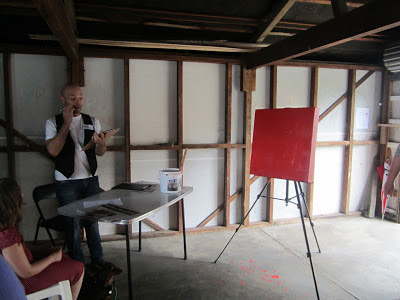 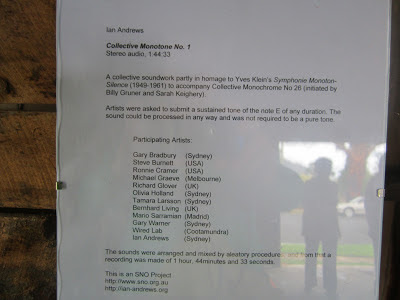 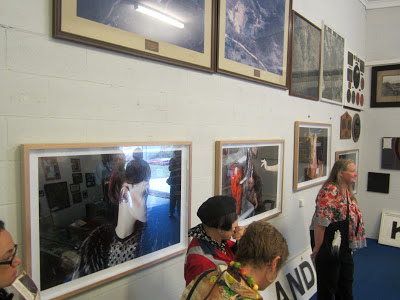 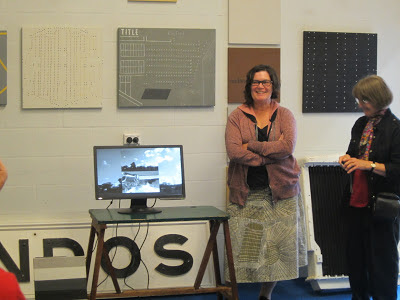 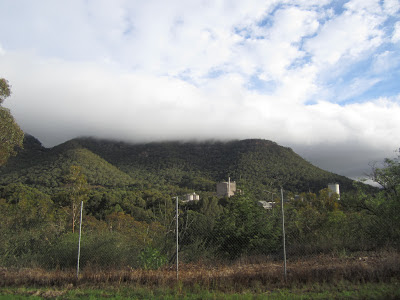 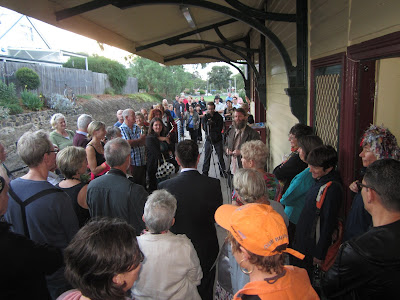 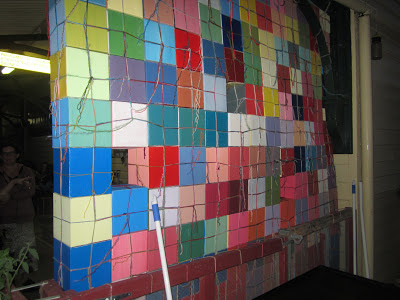 Very fortunate to get a lift with the lovely Naomi Oliver who happens to live in my local area which gave me a nice break from the train. Kandos is a sparkling little gem tucked away in the landscape next to two of my favourites, Rylstone and Ilford. It's jam packed with odd curiosities, strange knitted toys and lots of 4-wheel drives. It’s where the cement was made to make the pylons for the Sydney Harbour Bridge. Luscious wide streets with a hickelty pickelty of character architecture. We arrived in the afternoon after driving through most of what Mother Nature could hurl at us to a damp little town and after inspecting one of the picturesque campsites decided it was time to catch up with our first tour.

First up is Margaret Roberts at the Scout Hall, her 'Polygon Landscape' cardboard laid out on the floor of the Scout Hall, apparently these 40 pieces represent side profiles of Kandos houses, they are quite large and are cut from thick cardboard. It’s an interesting piece of local history and a bit of a ‘Grand Design’ idea as most of the profiles show that the houses aren’t a grand design but as all houses are the owners castle I guess they are and for some unknown reason I love cardboard, particularly thick cardboard, I guess it has something to do with it's thickness and unbleached appearance.

Next up we all walked down to the next exhibit at Ad Hoc Furniture for work by Zio Ledeux, let me say right now that the only work I got to see was the photo montage of ‘Andy does Kandos’ and loved it, what a great idea, wish I’d seen it happen. Every time I go through Leura on the train I want to get out and put an ‘F’ in front it.

It was an overcast day so thankfully I bought my umbrella.

Further down the road we came to The Brown Owl with work by Christine McMillan, my video is a little blurry but it has Christine explaining the work to us. The objects created were as smooth as a babies bottom, I snuck a touch as I always like to touch but don’t tell anyone.

I went into the church and looked up at the back wall and become entranced with the slide projection by Sarah Breen Lovett of a simple action of doors closing, one door closes and another opens, this piece holds so much in the palm of it’s hand.

Off to across the road to Mort’s Place where SNO Group were set up in a garage, ‘Collective Monochrome No.26’ by Billy Gruner and Sarah Keighery, a piece which involves interaction from the general public, there was a painted canvas sitting on an easel with a bucket of red paint and a brush on the table, we took turns to paint the canvas in any way we could. Had to be part of that and then sign our name on the form. Being a painter gives you a unique perspective on your surroundings. Over in the corner there was ‘Collective Monotone No.1’ a sound piece by Ian Andrews where other artist’s from all over the world contributed by giving a single tone of the note E, I really loved this piece as it reminded me of my many visit’s to have an MRI, I tried to get back on another day for another listen but couldn’t.

With a bit of a trek up the hill to the Kandos Museum we found Bronia Iwancak with ‘Sunset’ digital photographs depicting items entirely from the Museum set within the Museum setting. The Kandos Museum is a wild and woolly place with everything you could possibly think of that has existed on this planet then this Museum has it. Majority of the items have been donated via deceased estates so you can imagine what’s in there. From those ghastly racist toys to one of only two in Australia an AC-DC converter. A little bit of curious spooky for everyone.

Over in the far corner was Fiona MacDonald with her first ever video piece ‘Sunset Kandos’ a split screen in 4 parts, upside down and right side up, showing both sides of the Kandos streets, Fiona gaffa taped a camera to the side of her car and drove for miles around the town, she then put it all together and picked out certain things to show in reddish orange which I think looks great. I sat on the seat and watched it all the way through, it was to record the lots that were marked out on the original 1915 auction document. I find it terribly interesting how the land changes constantly around us and how we record them. There is also oil paintings of the layout of the street lights and these were painted using the colours of the ingredients that was produced by the Cement works to create cement. Bravo!

Time to head off down to the opening ceremony at the Down The Track Cafe to see also the very big and beautiful ‘Side Wall’ by Kate MacKay with her signature cubes, I’m a big fan of Kate’s, I love her use of colour and her use of space to create these gorgeous structures.

The cafe became quite packed quite quickly, ran into lots of familiar faces and we all had a ball. It was time to move to a bigger venue so on our way over to the Railway Hotel we found ourselves in audience mode listening to the wonderful vocals of Liam Benson doing a great rendition of a Fleetwood Mac song, oh my, I think he is 'the most handsome of the art world'.