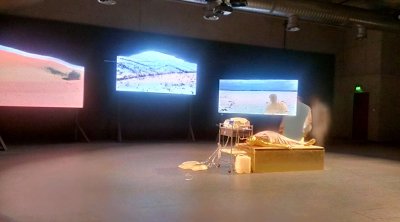 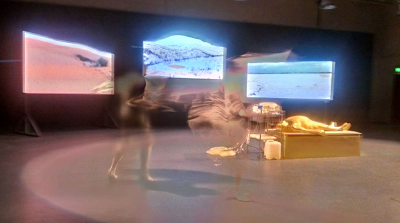 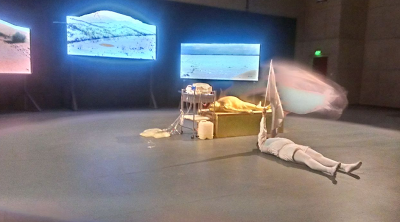 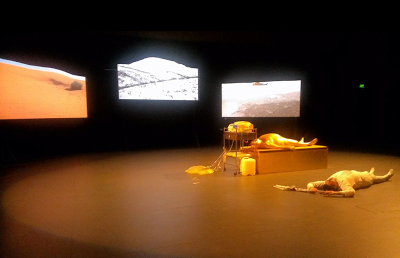 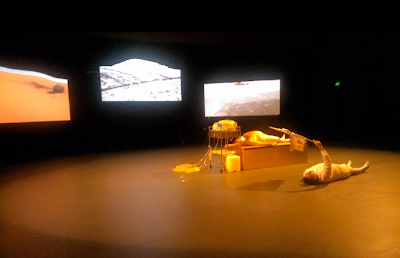 I was first struck by the three videos of the Australian outback landscapes which drew me to the exhibition in the first place. Each high quality and large video had Douglas’ strange gold body form rolling, stumbling, dragging his dialysis bag and then flying, appearing and disappearing in deserted red earth, snowy mountains and salted pan spaces. It’s a collaborative master piece with a movement coach, Sue Healey and soundscapes by Naomi Oliver and Heath Franco.

In front of his projected videos, the large gold man could be found lying on a bench attached to with long tubes to dialysis fluid bags on a hospital trolley in Bay 18 of Carriage Works. He got up and moved around the room but was stopped because the tube was attached to his abdomen as if on a dog lead. I was later to learn that he really is on dialysis because he has kidney disease. He was stuck and I felt the frustration. The landscapes in the background gave the impression that he was hallucinating, his mind escaping to wide open spaces. They also gave me the impression of Dali like surreal dreams or a spiritual vision. Frida Khalo also painted herself like this when she underwent medical procedures.

He walked back and sat on the bench for some time. You are watching a slow moving artwork. I wanted to draw or paint him like I had learned at art school. The light and shade enhanced every contour on his shiny rotund body.

Later, as guest collaborator on the opening night, David Capra’s intercession performance interjected with John’s. Dressed all in white, Capra pranced quietly across the room waving a banner on a long stick. Was he an angel or some sort of Holy Spirit man? I have heard lately of a woman who believed she visited heaven and she saw people waving banners that were 40ft long. The banner seems to be an important tool in intercession.

Capra’s presence brought a joyful, peaceful spiritual atmosphere. He is hilarious but he seems very serious at the same time.

Capra lay on the ground in front of Douglas waving the banner and began to sing operatically in a strange spiritual language and repeatedly calling out “Give me ... John!”

He then invited people to collaborate in this strange ritual. He ushered them to lay their hands on John while David sang again. “ shana shaba badabba! Gimme .. John!” It was like a Catholic Priest directing prayers.

I felt drawn to join in and believe with this man or angel for John’s healing. I walked out hoping for his supernatural healing like I have witnessed in revival meetings before.

I am delighted to see contemporary art which is Australian and addresses taboo issues bringing them to light with light heartedness and humour.

In the next room is John’s new work, The Visceral Garden, consisting of more video masterpieces. John is now dressed in a red suit set against tall trees, amongst other sites of our beautiful Australian landscape.

These men dressed like clowns are very bold and Capra is hilarious! You just have to see it!