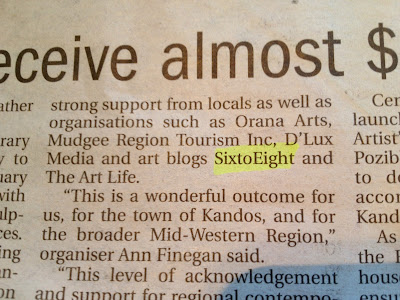 Q. To quote Dr Lisa Anderson, 'what were you thinking'..?

A. Georgie and I had just had a one month residency in the town and were pretty well in love with it. It's one of only two towns in Australia that began in the 20th Century.  An industrial town.  A little fibro studded working class town.  And it was sitting in this stunning rural context, nestled into the shoulder of a mountain and overlooking a massive valley.  And then if you add the fact that it had a massive industrial complex, the recently disused cement works sitting on the mountain next to the town.  Well, really.  What could we think but art festival?

Q. Would you consider changing the time of year for the next one..?

A. Really we are considering ways to toughen art up.  We thought the middle of the Australian Summer was a start and perhaps for the next one we might make it in the middle of the Winter.  It gets mighty cold in country NSW and we thought maybe a boot camp atmosphere, 1 minute showers, 10 minute meals and 10 Kilometer runs at 5 in the morning.  We have a little saying here at Cementa: "take a teaspoon of cement and harden the f* up"

Q. Can you tell us a bit about where you three hail from..?

A. Georgie and I are refugees of the gentrification wars of Sydney's Inner West.  We have been making art and organizing space for the last five years or so and have brought many of the artists and a love of art that grew up out of that scene with us.  Ann Finegan has been around a little bit longer.  She is an arts writer and academic who has followed, cultivated, and written about Australian contemporary art over the last twenty years at least and her contribution to the festival cannot be underestimated.  She has brought so many exciting artists into the festival and her incredible energy has fuelled the massive effort it has taken to get us to this point.  It has been a very interesting mix, with us knowing such different sets of artists that has made for a very interesting mix.

Q. Are there any long term benefits that will impact Kandos and the local area..?

A. We believe it is a possibility, but know that making this a substantial, lasting impact will be a much longer game.   We are already thinking of the second festival and are excited by the prospect of developing work over a two year period.  A four day festival every two years is hardly going to change the economy here but if the festival persists as a longer term enterprise, bringing artists into the area and further engaging the artists that live here, we can see it changing perceptions of the town and area, encouraging cultural tourism as a viable industry. Your gentrification vulnerable readership might be interested in knowing that property prices in Kandos are one fifth the median price in Sydney.  Artist colony anyone?   We are also considering potentials for research and development along the nexus between science, art, and the environment.  These are all dreams of course, but then so was this festival not so long ago.  For the time being we are concentrating on getting through the first four days of February.

Q. Does this festival cover a diversity of styles..?

A. I'm not sure style come's into it so much any more.  Contemporary art forms are so diverse (and much of contemporary art resists collection into general category like "form") that it is difficult to speak of work in terms of style which implies a spectrum of difference within a relatively unified field.  How do you describe the difference in style between a video and a textile work?  Or between a Liam Benson performance and a Margaret Roberts installation.  Even in video art, of which we have a fair bit, I don't think I would want to describe the works in terms of the differences of style.  So the short answer is yes, we have a broad diversity of works, from textile to performance to video, installation, as well as oral history projects, sound art and beyond.

Q. Have you had to fight tooth and nail to get where you are now with the festival..?

A. It has been a struggle and a lot of hard work and some very unpleasant shocks along the way but tooth and nail, no.  Many of the locals have really come to the table, contributing venues and helping us find our feet in the town.  They have shown us a warm welcome tempered with a wait and see attitude.  Which is as much as we can ask for.  There have been tensions of course, but that is to be expected.  The fact that ArtNSW had the courage to fund such a raw, fledgling project was also an unbelievable boost.   Also the positivity of the artists has been invaluable.  When you put an idea like this out in the world, there is a moment when the world either takes it and runs away with it or it stops dead in its tracks at your feet.  This festival really happened when the artists we approached not only agreed to participate, but got excited by the prospect.  It was at that moment that the festival became a possibility.