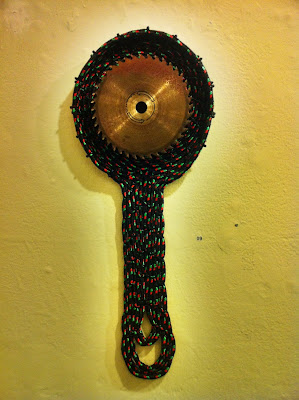 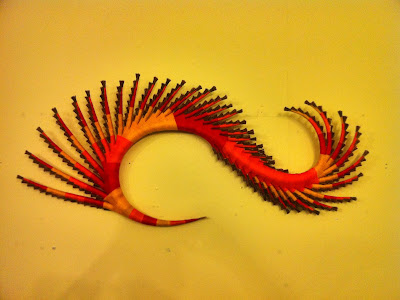 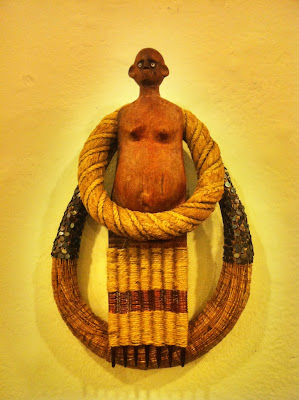 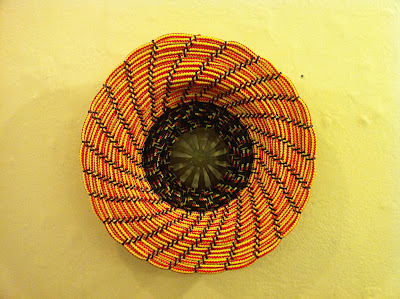 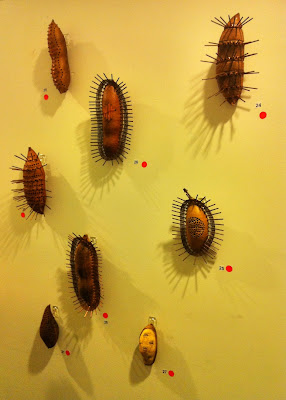 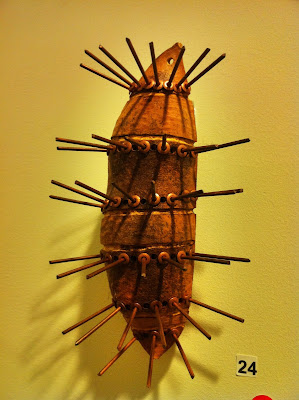 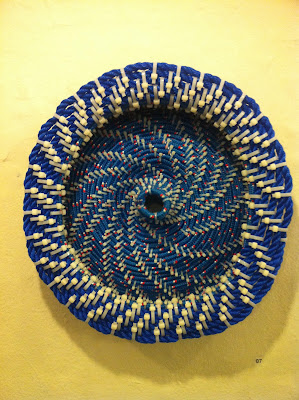 'Accident prone' is a clever title for an exhibition in a pop up salon within a Doctor's surgery. As a title for Diablo Mode's recent exhibition it also suggests a process of making in the studio informed by the wise intuition of the happy accident in a prolonged dialogue with rich, natural and man made materials.

If you are familiar with Diablo's work then you are probably already a devotee or a collector of it.  It has a kind of magnetism that pulls you in.  The works traverse a territory between the naturalistic bounty of strange fruit one might find on a forest floor and of sacrosanct reliquaries celebrating the sacred and divine.

Within this exhibition the artist maintains his vocabulary of materials, a delicate use of Casuarina and Chir pine needles, bound with coloured threads and copper wire and Sydney Black Bean seed pods pierced with screws and metal tacks.  'Accident prone' boasts Mode's most impressive series to date- of refined works created with coloured variegated nylon rope, again bound and constrained using plastic cable ties.  All the works share an understated kinky aesthetic, in which their binding is both a kind of domination and willing submission, as the artist and material shift in a power play of who has the upper hand.

'Mood swing II' and 'Pisshead' pictured on the exhibition invite, exploit a colour palette of reds, oranges and yellow, which works in combination with the spiraling and binding to unite the two strands of work of plant materials and of rope.  'Mood swing II' visually refers to the infinite, and of creation, of cycles, of rising and falling, unfurling and closing up.  It is characteristic of a certain species of Diablo's forms, which feel like spiraling avian creatures about to take flight.  'Pisshead' is aptly titled, with intricately bound spirals of yellow and red rope surrounding an antique urinal rosette.  This work triumphantly embodies the subtle, or at least restrained homoeroticism of Mode's work.  In 'Pisshead' one could argue that a whole branch of fetishism of piss, watersports and piss play is played out through the spirals of devotion focused around the rosette to create a new kind of flower.

Found materials operate as a kind of disrupt across the exhibition, whilst in the individual works each evoke the poetics of form and material, as if the artist could not resist to see what this or that might do.  This is a practice rich in play and discovery.  'Goddess' incorporates a Tanzanian figurative hair comb, bound and woven with jute and copper wire and an antique quoit.  This strong figuration is unusual outside of Mode's drawings and on reflection 'Goddess' is one of the most compelling and accomplished works in the show, the curve of the quoit forming arms for the figure and echoed in the bound Casurina below, which grounds the piece.  'Scorpio' is brought to life with the inclusion of two dark metal callipers, becoming deadly pincers whilst a cluster of silver spoon heads within 'Feast' form a kind of armour plating that punctuates the base of the work.

In the room sheet The artist says of the work: "The sculpture in this show represent moods, memories, habits and routines of the artist.  As baskets, they are stripped of their function and exist purely for decoration.  Their purpose isn't to hold fruit, car keys, coins or anything else that gets thrown in a bowl, but rather emotion and ideas."  He references his passion for the etchings of Ernst Haeckel who produced the divine visual tome 'Artforms in Nature' and Albertus Seba 'Natural curiosities.'  This influence is visible in the work through a shared "inspiration from the mathematics of nature" and a curiosity and making that both honours natural form, whilst pushing it beyond the boundaries of experienced reference points.  Mode's works extend our imagination of the natural world, creating forms which invite contemplation and inspire awe and visual delight.

The opening was characterised by the handsome crowd, friendly atmosphere and a consistent orchestra of 'Ooohs' and 'Aaahs,' the sonic reverie released from our pleasure centres when stopped still in an encounter with beauty!

Lionel Bawden, 23rd April 2013.
Lionel Bawden is an artist, a peer of Diablo Mode and collector of Mode's work and Guest Reviewer for Sixtoeight.net