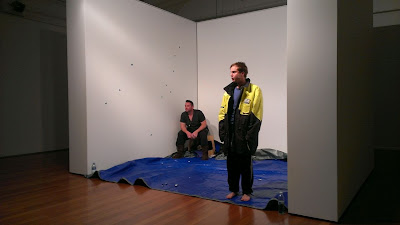 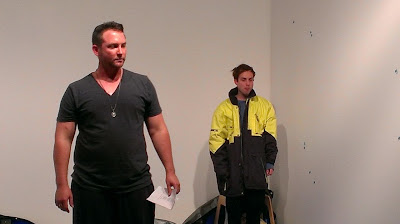 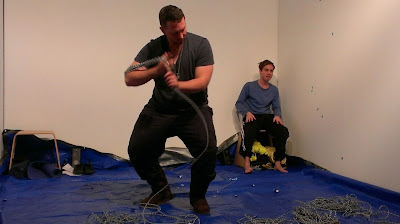 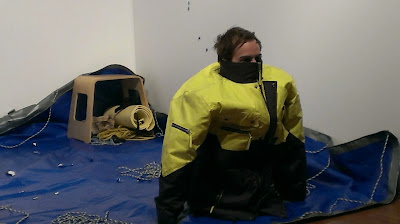 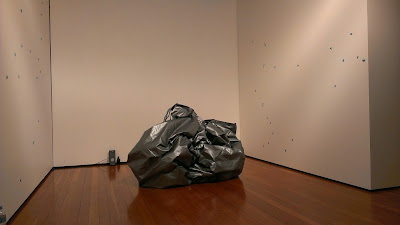 On Monday afternoon at about 5:15pm, I dropped into Artereal Gallery after Liam Benson posted a Facebook invitation to his collaborative performance, with dancer/performer, Nick Atkins. Even though it was advertised from 3pm, it was as if they were only setting up and it looked like it was still in construction. There was a blue tarpaulin in a space within the Gallery, with ropes and a couple of stools and workmen’s clothes.

The artists’ brief was to collaborate within the confines of a 3 metre x 3 metre white cube. This was one of nine collaborative performances over nine consecutive days and this was the only one I got to see.

Nick and Liam were dressed in their tracky dacs and ugg boots, looking like ‘bogans’ or ‘westies’ as we used to call them. They really did not look ready. Then Liam said he was going out to get some chewing gum and that the next performance started at 6pm.

I returned to see the performance and I am glad I did. This Pas de deux meaning a dance for two people was not the usual. It turned out this ‘bogan’ outfit was their costume and the tarp, construction material, as well as the blue chewing gum were their props. The blue theme throughout the work had a familiar Australian, masculine aesthetic. Blue water bottles were also present to match the colour scheme.

I know Benson to dress as a woman in his art performances but this time he was dressed like a typical Aussie male with his slight sized mate in what appeared to be their room or apartment. It could even have been a gaol cell. The audience became voyeur to a very personal male scene. The artists chewed gum and sat like thugs on the stools looking bored, gazing out into space and they then took turns in performing a gesture.

Benson put some music on and rolled out a blue yoga mat and did a workout complete with sit-ups and star-jumps. He then rolled up his mat, took the blue chewing gum out of his mouth and stuck it on the wall. It was quite disgusting - as men can be! Benson suggests this symbolises men taking up territorial spaces, spreading even their spit to bags spaces. The way the artists sat in their spaces was also symbolic of men and their territories.

It was then Atkins’ turn; he pulled out an oversized fluoro construction jacket, put it on then daintily crouched down and buried himself in it, only showing above his eyes. He later told me this gesture symbolised hiding his body. He had aerie facial expressions throughout the performance and this was enhanced by a dodgy striptease where he would roll up his trackies and reveal his ankles and shins; at one point even kissing the wall. This was about exposing little bits of male body which is not usually a socially masculine act to show off their bodies. Benson also followed suite and began showing his neck in a pseudo risqué manner.

They continued the gesture of taking a new piece of chewing gum, sticking the used, chewed one to the wall, then throwing the wrapper on the floor. Benson then took some rope and began to role it up, throwing it out of the 3 metre confines, then threads it through the edge of the tarp. This gesture also involved macho movements, flexing muscles as he rolled the rope.

This is a humorously familiar because a friend of mine has seen her young boys stand in front of the mirror and admire their muscles in this kind of fashion after they have done a workout in the gym.

At another point, Benson broke out into one of his signature, spontaneous Acapela songs in a very classical tone, only to return to his masculine acts in doing an exercise workout and rolling and threading ropes.

After dressing in his over sized fluoro coat again, Atkins exits the room and Benson is left and begins wrapping the tarp as he pulls on the rope like a drawstring, gathering the entire contents of the space into a ball like he was wrapping up tools in the back of a ute. In contrast reminiscent also of wrappings by Christo and Jeanne Claude.

The end resulted in quite a beautiful scene with the silver backed tarp with blue lining against the white walls with spots of blue chewing gum.

Artereal Gallery stated that “Liam Benson in association with choreographer Nick Atkins will develop, rehearse and present a dance routine, Pas de deux for a noble savage exploring gender and masculinity which will inform Liam’s new work for exhibition at Artereal in 2014.”

We look forward in seeing Liam’s developments in his explorations of masculinity in his 2014 exhibition. I think the reason for Benson’s success in the artworld is because this is contemporary performance art practice with a quintessentially Australian aesthetic.