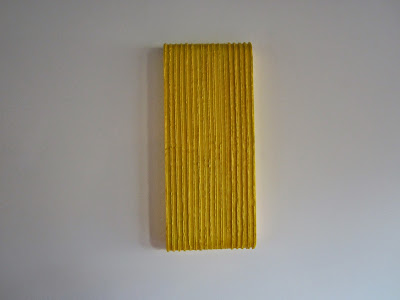 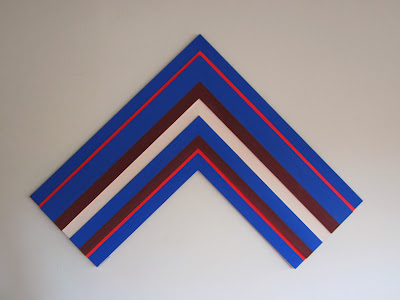 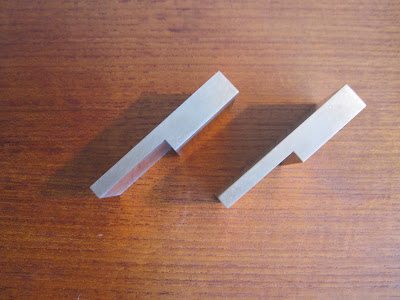 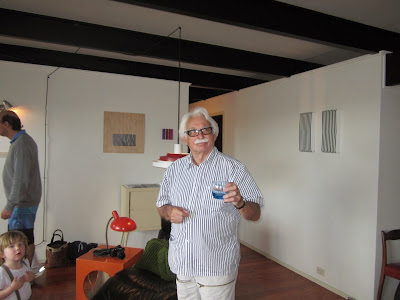 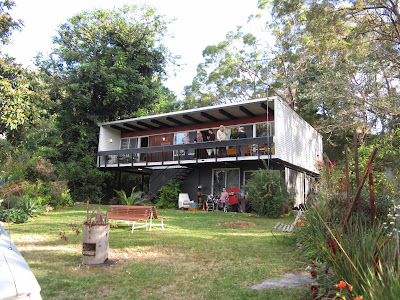 How selfish is it for the majority to consider that there is only landscape painter’s living in the Blue Mountains, well in the tradional sense that is, yes but there are also abstractionist’s, deconstructionist’s, minimalist’s, surrealist’s, installationist’s, multi media, multi interdisciplinarist’s and the list goes on. So there is no excuse is there..!

In 2012 I moved to Faulconbridge, middle Blue Mountains and discovered a whole varied salad of different Art practices, which I think has definitely influenced my own art practice. It all started when I was invited to attend the 1st demo run of Modern Art Projects ‘MAP’ on Monday 1st April 2013 at Billy Gruner and Sarah Keirgerhy’s ‘Beachcomber’ which they are restoring just around the corner from where I live.

Architect Nino Sydney designed ‘The Beachcomber’ as a project home for Lend Lease in 1961, the Mark II Beachcomber house built in 1963 perched on top of a rocky hill in Faulconbridge, Blue Mountains. This house is the perfect setting for a salon show of modern art, it’s open plan with lots of wall space, freedom to move, great air circulation and a relaxed atmosphere.

Also the coolest house I have been invited into, ever!

The 4 hour opening with three diverse artists, Arpad Forgo from Hungary, Riki Mijling from The Netherlands and Susan Andrews from Sydney. Arpad’s work is juicy with it’s layers of paint and grooved surface’s, the colours are vivid and vital and if you were one of the few who went to this then you were fortunate to go home with one of his little prints as a gift as I did.

Riki Mijiling from the Netherlands works with graphite, wood and metal, the images that prodomenate her work are interchangeable and have infinite possibilities, the small metal sculpture which I picked up and played with was something which has stayed with me since.

Susan Andrews geometric work expresses the need to follow each line to it’s hard edged alternative reality, it’s those blue’s and reds that are at opposite ends of the colour wheel that create an optical illusion and helps the work to jump out at you.


The 2nd demo happened at the ‘Russell Jack’ house in Wahronga, NSW, Sunday 16th June the owner Annalisa Capurro is seen in the video talking about the design of the house. Unfortunately I was unable to attend the opening so sent the Sixtoeight camera off with Billy Gruner to film the event, also in attendence were my home made Chocolate Truffles for guests to enjoy. Watch the video!! 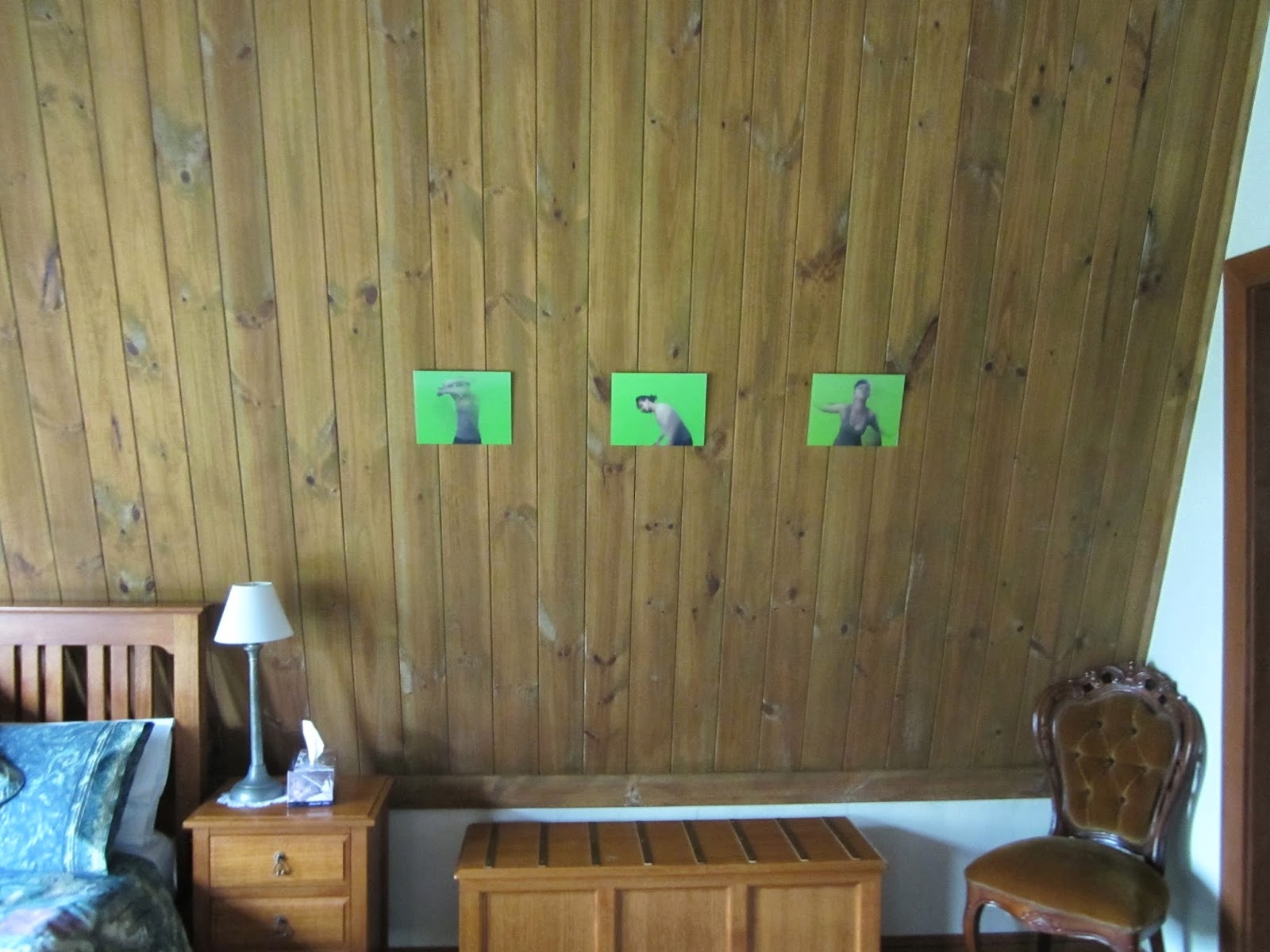 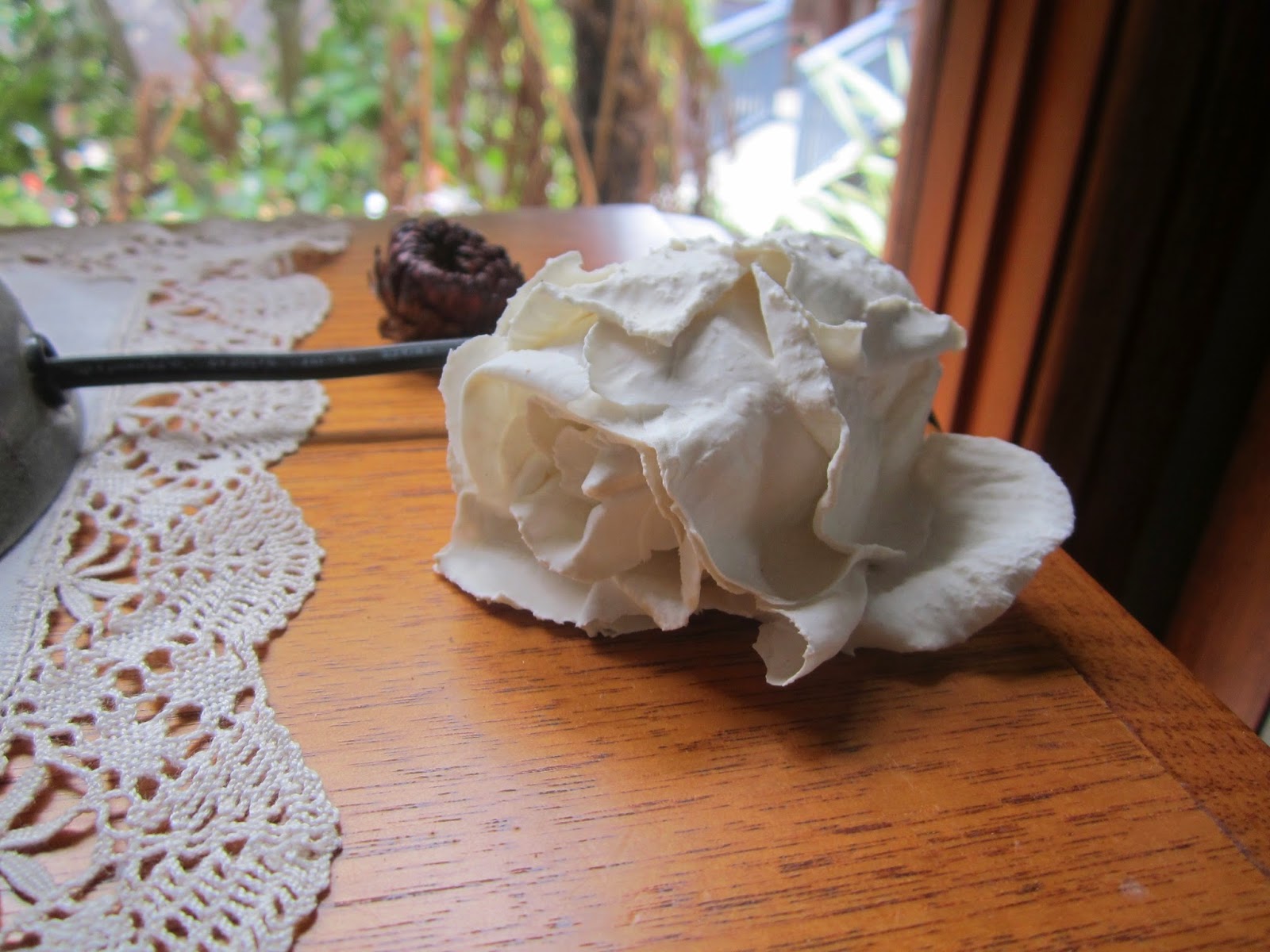 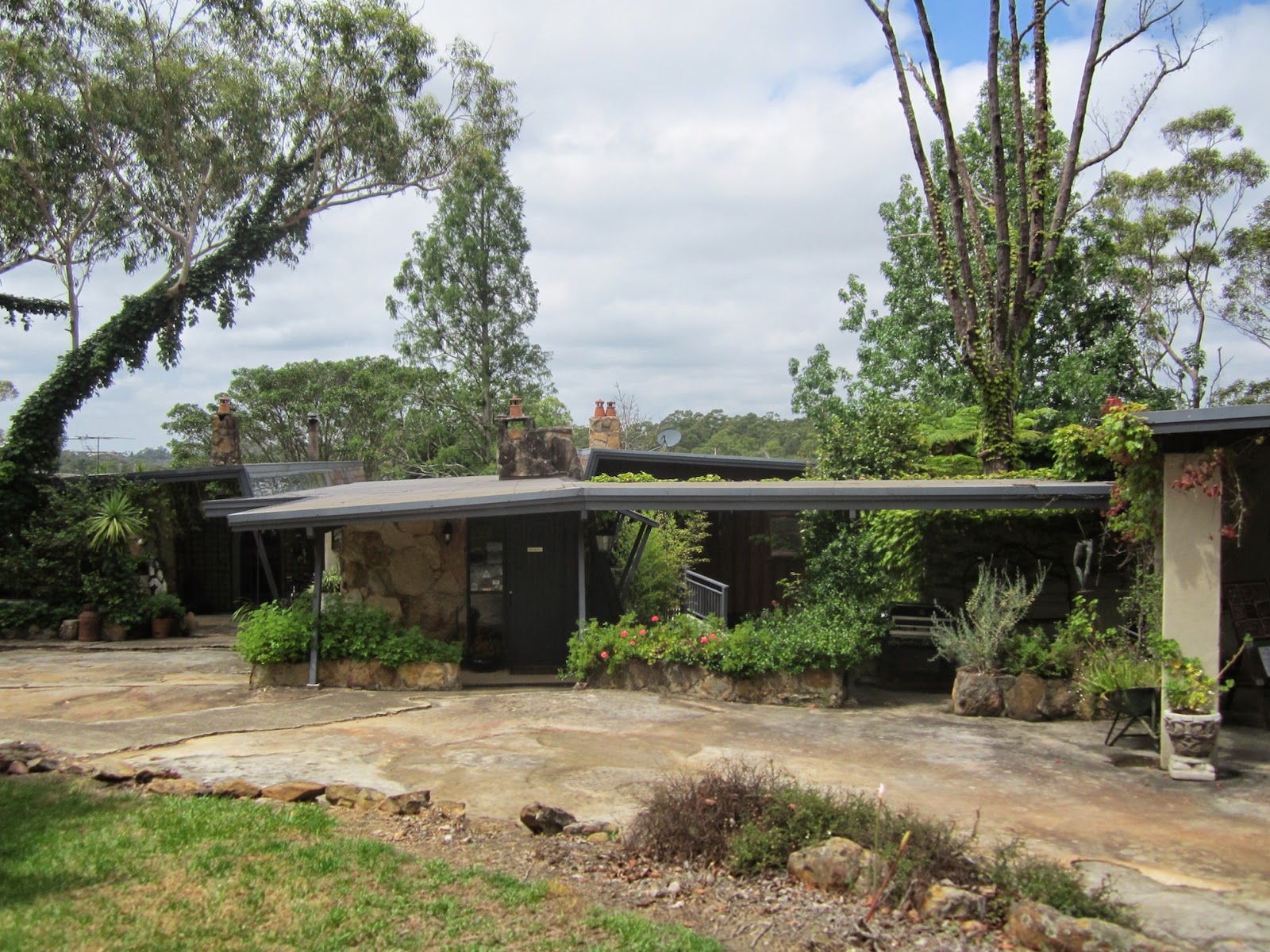 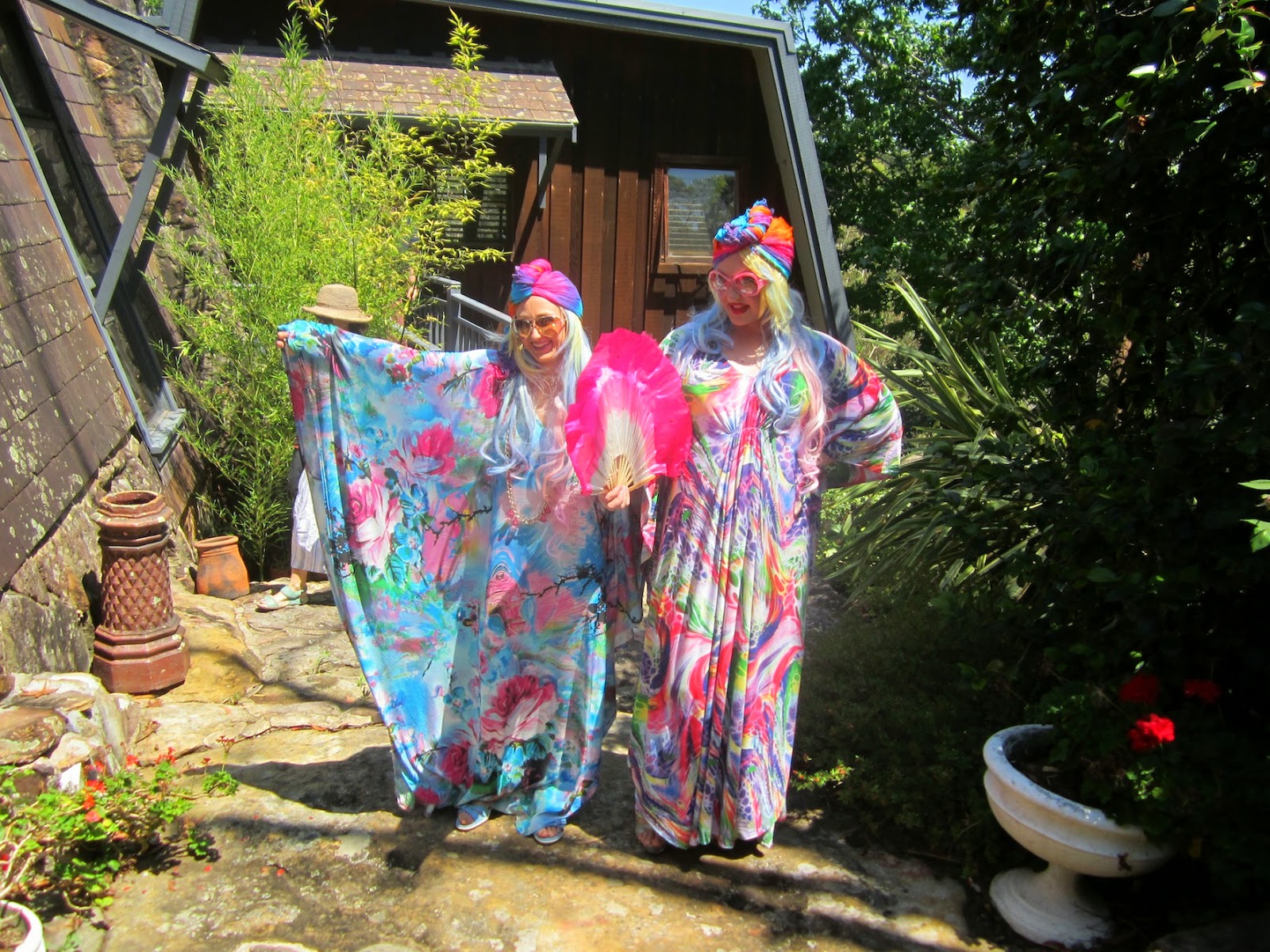 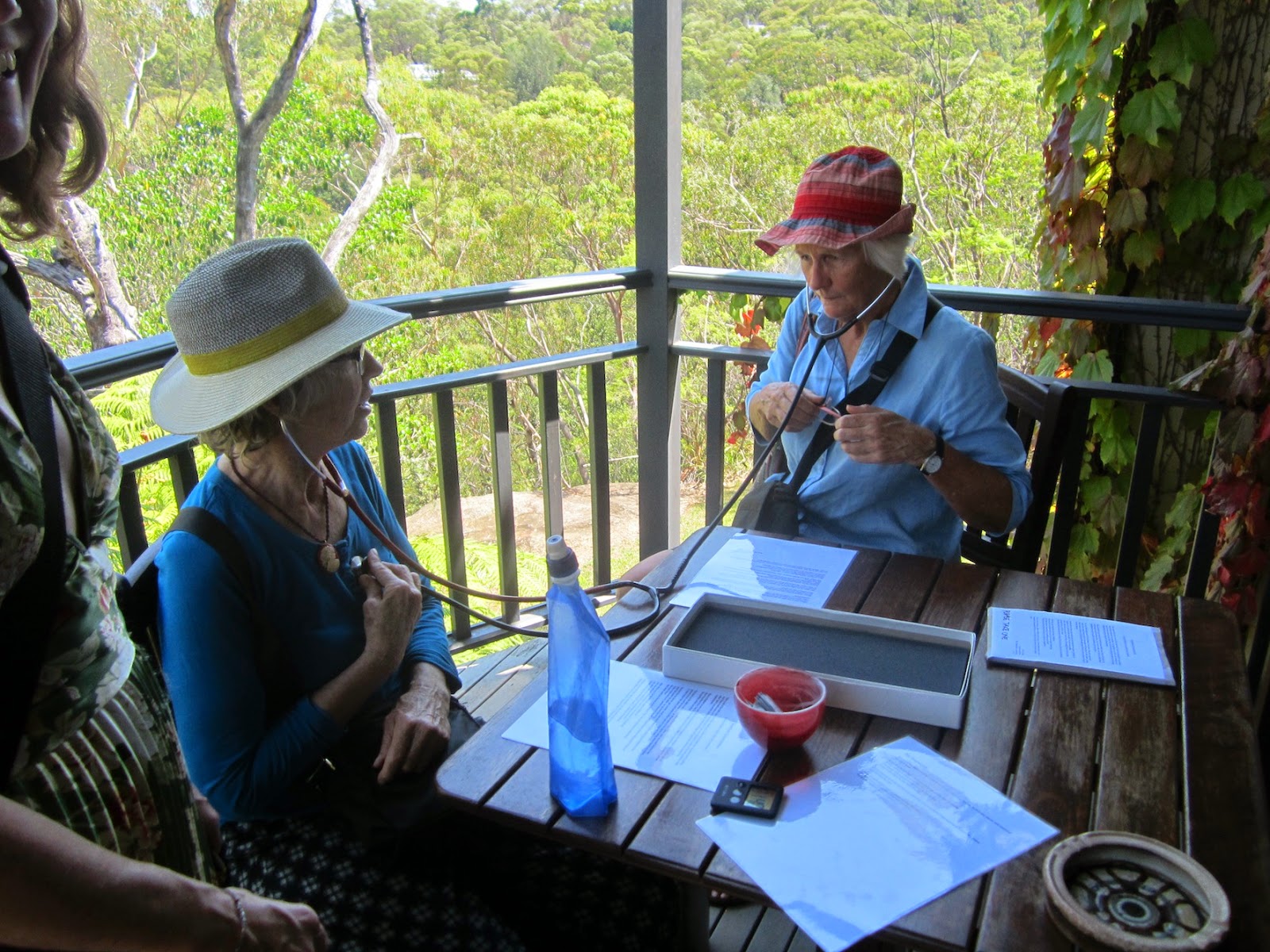 2nd February 2014, the 1st official ‘Modern Art Project’ happened at the Kia Sulc House on Chapman Parade, Faulconbridge. Hand built in 1960 by the retired sculptor and ex art master of Springwood High and purchased in 1987 by Andy McDonald who is lovingly restoring it.

‘Interregnum’ curated by Lizzy Marshall, made good use of the spacious garden surrounds and rabbit warren pathways in and around this amazing house.

Naomi Oliver’s ‘Green Screen’, three Lenticular Prints were mesmirizing and to die for, movement within a photo. If I’d just woken from a 50 year coma I would think these works were a taste of the future or witchcraft trickery, but no they are from our past, takes me back to school with rulers and postcards and brought back to life through Performance Art.

Maybe I’ve been living under a rock or something.

Nicola Walkerden, a disc suspended from a tree, at first I thought I was looking at a reflection but couldn’t work it out that it was a fixed image allowing the light to pass through it, effective and also brilliant.

‘He said, she said and I don’t want to know’ by the sounds of it many noses were put out of joint .. But this is Art and for Art’s sake lets get on with it!!!

Leahlani Johnson had some very fragile but life like pieces inside one of the cottages made of porcelain, ceramic, plaster, acrylic paint, wood, metal, plant material, paper, cardboard and found objects. In the same cottage also an interesting work by Honi Ryan ‘Heartbeat Conversations’ where two people sat and listened to each other’s heartbeats. There was also ‘A Conversational Quadrant’ which unfortunately I didn’t get a chance to witness but lots of people talked about it so that’s a good thing.

There were also the Motel Sister’s, Paris and Tacky mooching around the grounds in there full makeup and insanely high heels commenting on such a lovely day it was and just looking incredibly gorgeous! 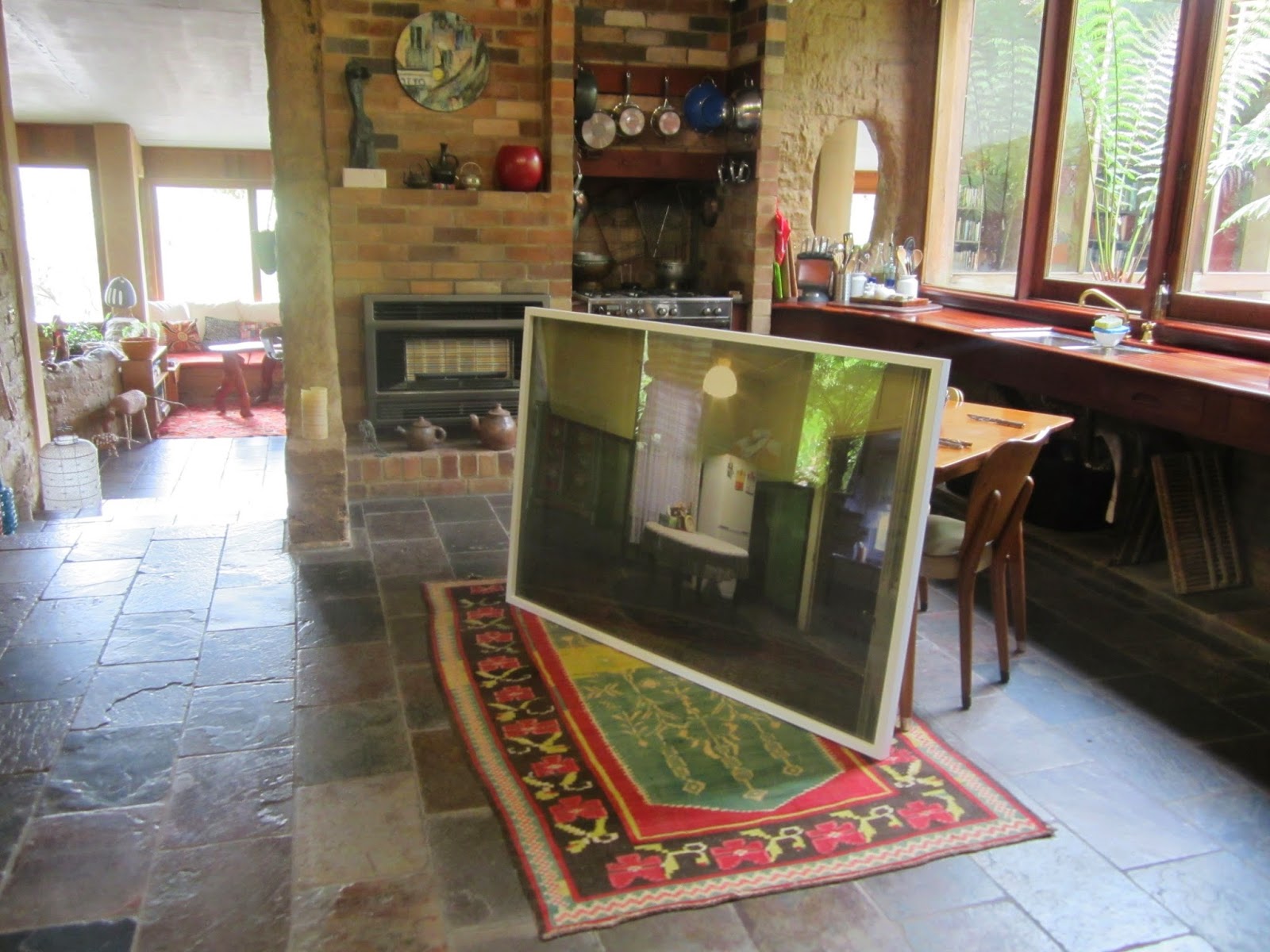 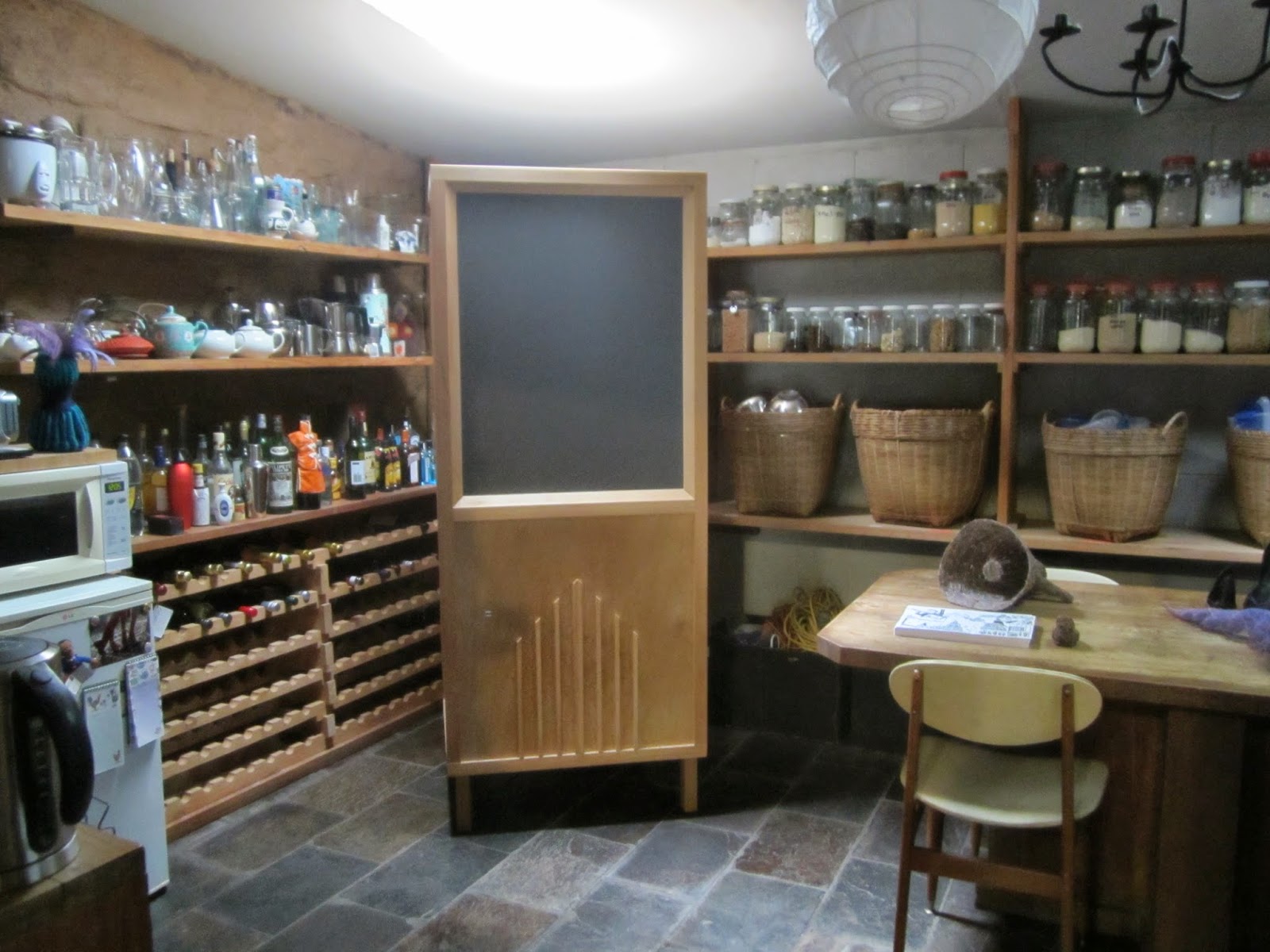 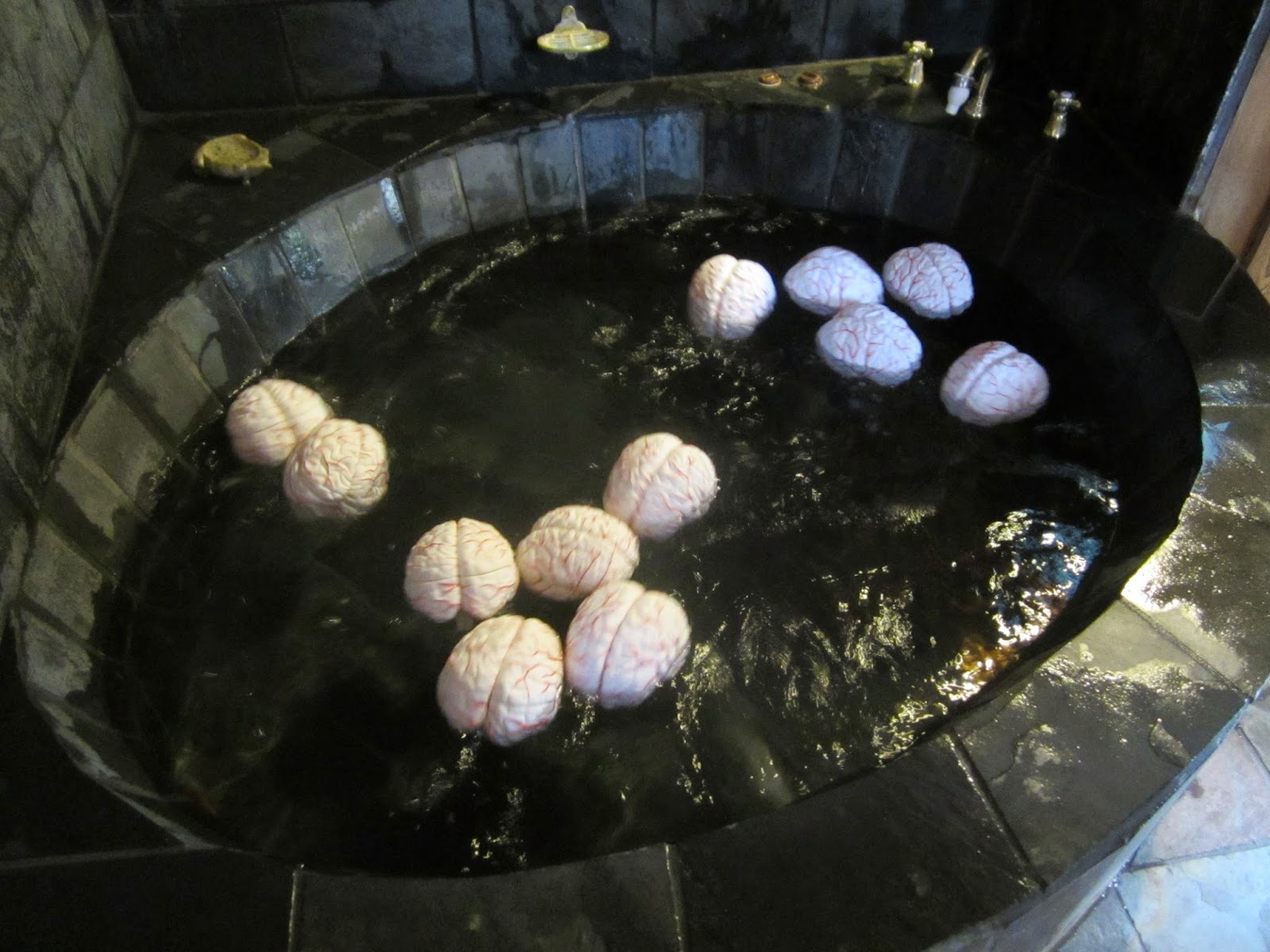 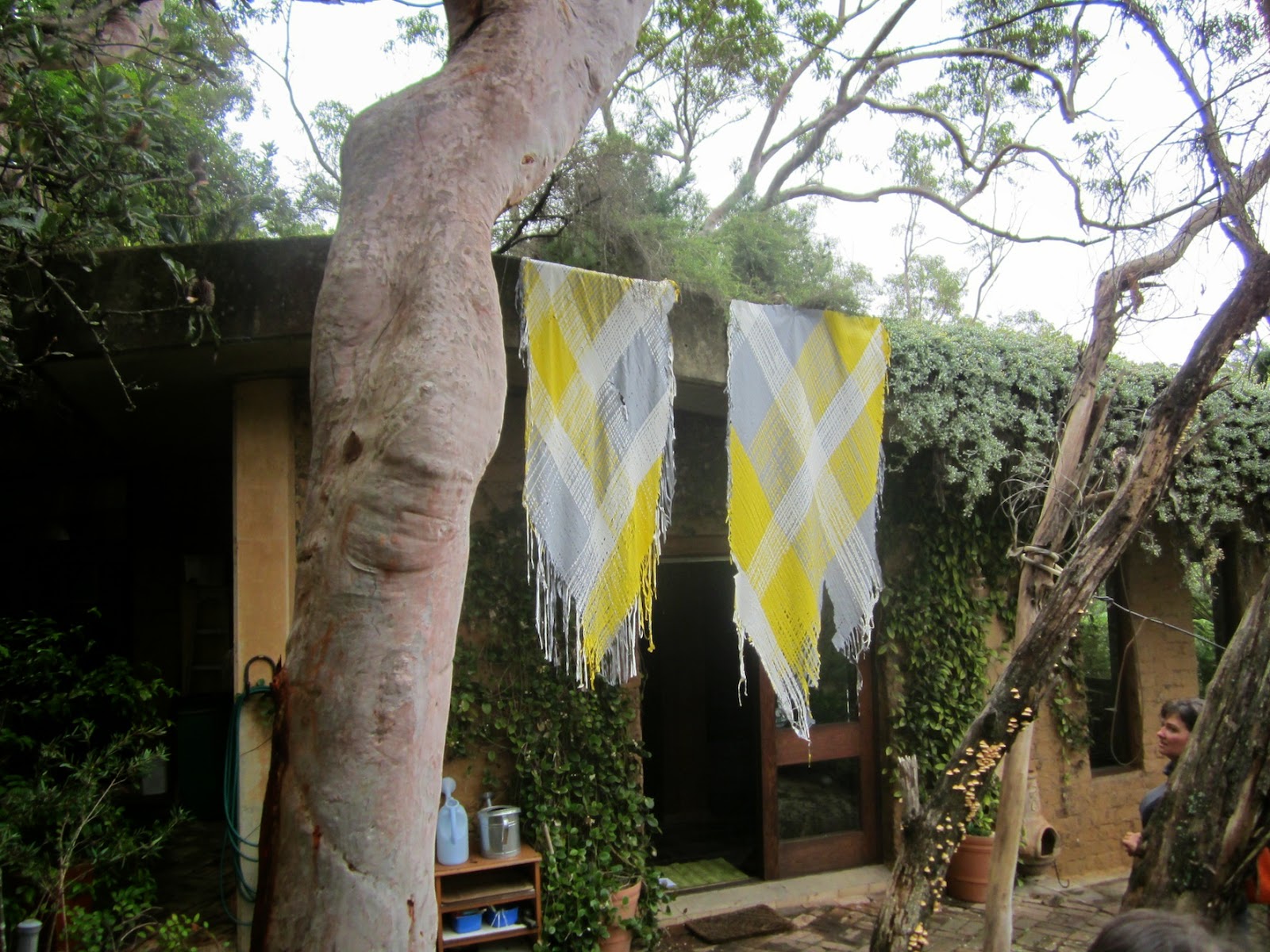 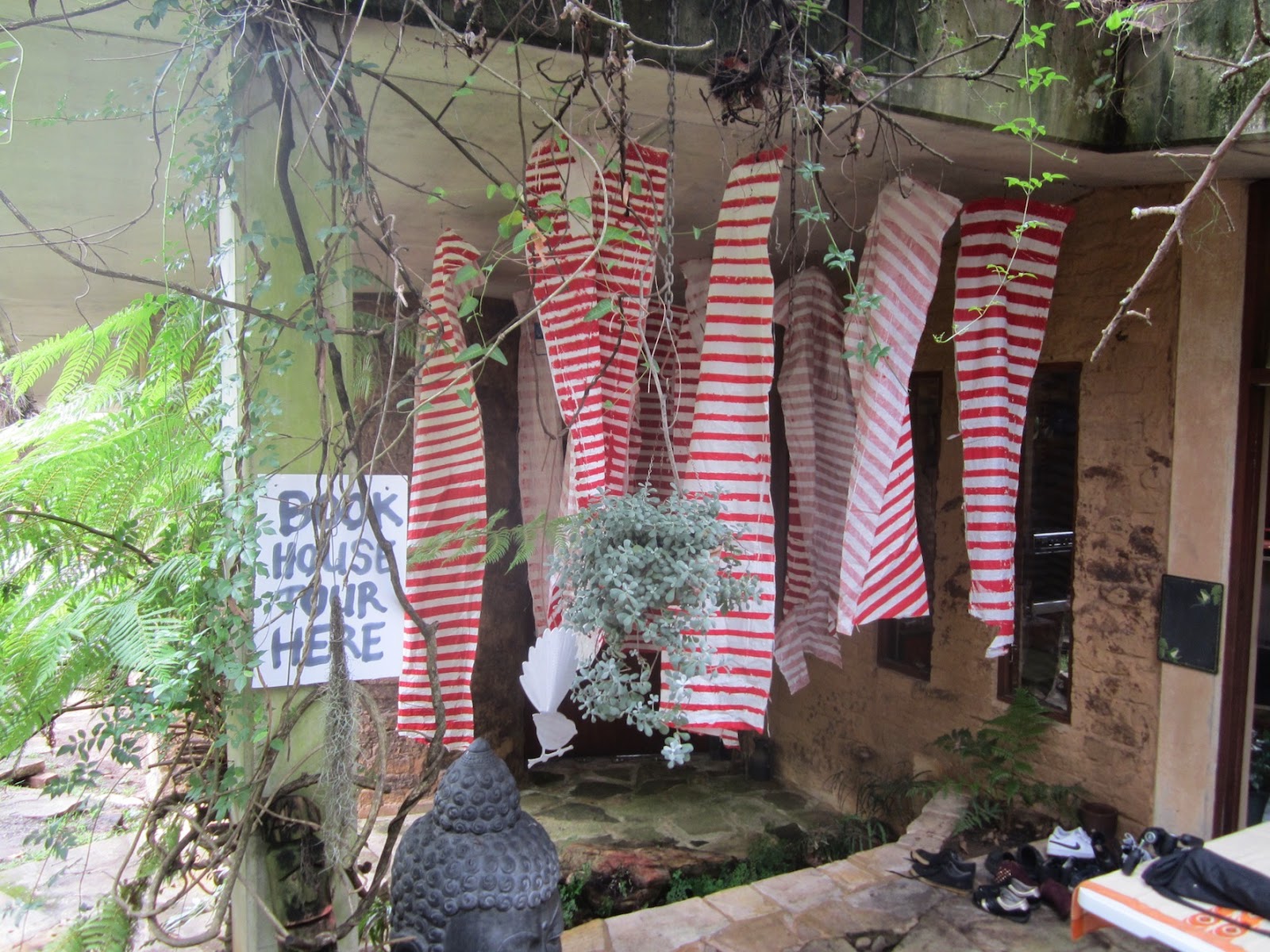 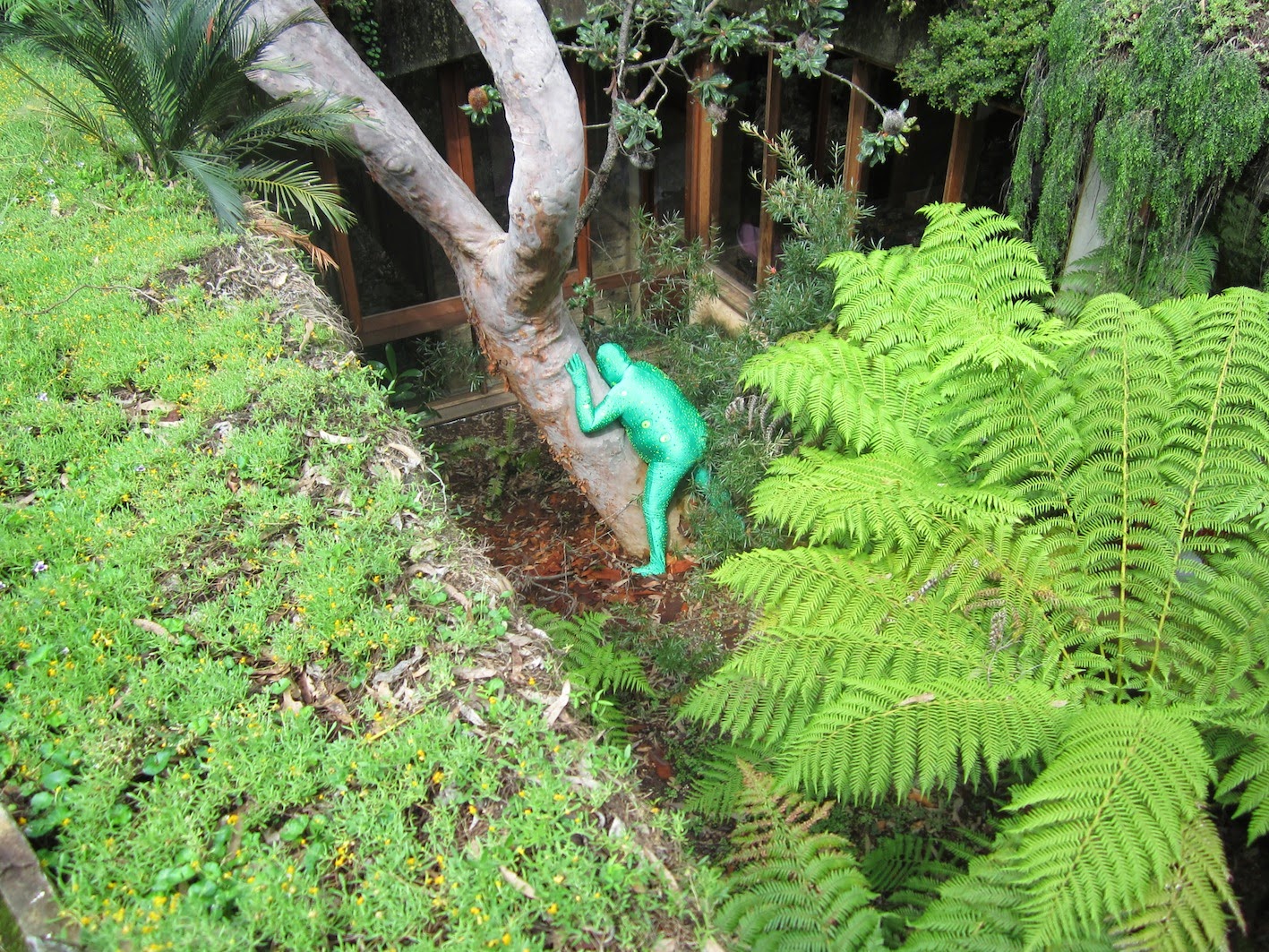 Sunday 6th April, Eco Spirit at Morton House, Woodford on the Blue Mountains for the 2nd official installment was a swirling swift event with military precision. A cast of thousands well not really but it felt like it, although think about it, you are having a party and you have invited 200 people and you don’t know any of them.

I am now officially a registered MAP Volunteer!!

Morton House built 1979 and some may know it as the ‘Cave House’ is made from mudbricks and has a famous overhanging Australian native roof garden that has a single file pathway and you will see it in the video, totally amazing.

A wonderful collection of Artist’s, some I know and some I don’t, some I’ve written about before and some I haven’t. Loved all their work as there was a lot to look at, most of it made you think, some of it gave a sense of serenity, some a little bit of not sure what the hell I am looking at and some were just brilliant, well most of it was brilliant and fitted comfortably into the natural surroundings.

John A Douglas performed his site specific ‘Vitrine: Incursion #1 (damp)’ wearing a luminous green body suit and he graced, well slithered and sneaked around inside the glass lined courtyard which the house surrounded. He also had a piece inside the sauna dipicting his little green mould from a lightbox. This work represents his life on dialysis and since his kidney transplant after this event we can only guess what his new life will bring to him now, congratulations John A Douglas!

Fiona Davies’s ‘Blood on Silk; Turn, turn away’ packaging material and paint which hung just near the side door entrance and where I was positioned to direct guests down the pathway. It wafted and waved in the breeze and was protected from the encessant rain which almost put a dampener on the event.

This was my first real experience with Fiona’s work and I think it made my day.

Already a big fan of Alex Wisser, his work ‘Blank Canvas’ archival ink on cotton rag makes you want to check out every nook and cranny, do you see the grammaphone cabinet in the corner beside the fridge?

In the work ‘ Sectia Aurea – The Golden Section’ of Beata Geyer and James Culkin, I wished they had waterproofed this work as it would have glistened and gleaned in the drizzling rain while perched on the cliff, the hot pink made a bold statement against the greys and greens of the native landscape.

Sadly I missed the piece ‘Generation Loss (poetics of decay)’ live performance and video installation by Ben Denham while it was in action as I love the concept.

Another Artist who I am a big fan of is Georgina Pollard, her poured pattenered paint evokes a family connection, I can’t not look at her work and feel a connection to my families homeland of Scotland. It’s a tartan or plaid, patterns and colours given to each Clan to represent a family name. ‘Song, Sung’ house paint and curtain fabric, this work oozes volumes of strength but at the same time is so very fragile.

If you got to see ‘Spectres of the Spectrum II’ plastic medical models, computer wires by Gianni Wise bobbing around by the jets of water in the bathtub then you may realize that they were being ‘brain washed’ funny and wise stuff, love it. Liked also the jab at Transfield via the ‘Carrie’ poster in collabration with the show’s curator Jacquelene Drinkall. Good call!

This whole exhibition has been an education and within the environment of the interior of a modern house it’s certainly been a test to all involved.

Outside in the side garden Locust Jones has produced some amazing ceramic heads, an extention to his vast ink on paper works. They seem to be the heads from the images he works and each one would tell a different story.

Inside the spacious pantry is ‘Home Clavilux’ wood, metal, perspex, vinyl, silvered mylar, DC electric motors, rear projection, data projector, media player, video loop a visually beautiful hand made piece by Paul Greedy & Tom Ellard. Sadly but these things happen, the projector died while this piece was being set up. Sound through light, this piece is based on the original Clauvilux.

‘Hokum’ video performance piece by Sarah-Jane Norman is an odd piece for those unfamiliar to her work like me, at first glance the Artist is vomiting on camera, we look away but our curiosity makes us look back and keep looking. I’m still not sure !

If you got to follow that tiny pathway snaking over the roof then you probably got to see some of the work by Vicki Browne, ‘Five Stones’ black ceramic work which looks like coal and her intricate sculptured cutlery made of twigs which could be found in the kitchen and pantry.

Last but not least would have to be my ultimate favourite work from this entire exhibition. ‘Colour Code 555-Pure Lustre’ by Sarah Keighery. Placed in a semi circle on the cliff top inching to the edge of our known existence these works demonstrate her approach to building materials, using cement to create an existing edge in the shape of a dotted line, gold pigment to bring a golden lustre. I’ll have to be forgiven for suggesting that these pools could mean ‘your eyes are pools of loveliness’.