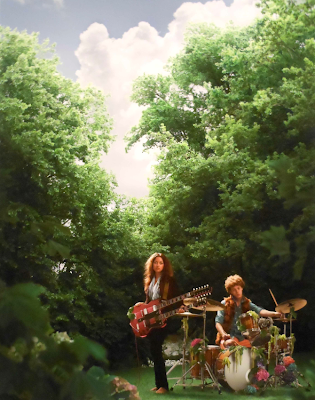 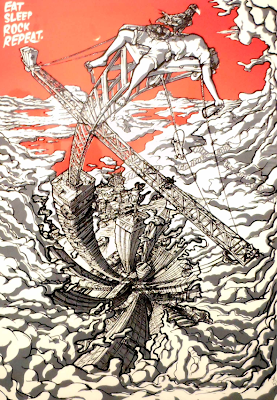 Given the number of art festivals thriving in Newcastle it’s apparent the pretty picture on the wall just won’t cut it these days.  With a combination of youth, vigour and big brained intellectualism contemporary art is plugged-in and working its muscle.  This louder form of creativity is revealed to full effect currently at The Lockup, an exhibition that is part of the Look Hear festival including the “Hit the Bricks” street art phenomenon.  “Fresh Licks” is a compendium of text, graphics and grand imagination and with a quick scan it’s not long before the music theme becomes obvious.

The warren of rooms that make up The Lockup welcomes a plethora of diverse images incorporating colour saturated photography such as Deluxe by James Mauger to precision painting such as Sir Bob Cornelius Rifo by Matthew Bourne.  For me the brilliant screenprint featuring a nesting eagle atop a chockfull of too much fun skater by Sam Shennan and UD3 was a highlight and had me wandering the gallery humming the mix Eat, Sleep, Rave, Repeat.  That is until I came to Hydro74’s poster for the fantastic gig by Nine Inch Nails and Queens of the Stone Age happening about our great land earlier this year.  The poster triggered reflection but unfortunately I thought the image was a bit hackneyed.  A skull perfectly executed replete with caped meandering vines just seemed so “been there done that”.

With the beard brigade on tap The Lockup is indeed in the happening end of Newcastle.  There’s a crush on fresh stimulus oozing from the gallery’s pores and this current exhibition is no exception.