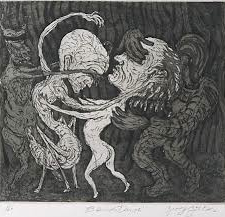 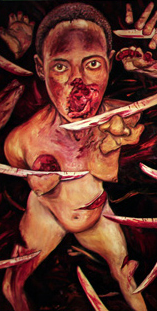 Regardless of the bombardment of warfare imagery present in our lives it’s apparent that distance leads to dissociation and therefore ambivalence in the greater populace. Until threat, whether inflated by propaganda or not, confronts us we are gratefully naive. The Australian artist George Gittoes threatens that torpor we celebrate. Recently at The University Gallery Newcastle, a survey exhibition of Gittoes work allowed the audience to experience the challenging reality of war.

Etchings dating back to 1971 reveal characteristics typical of teen angst and generational drama. A world exists within these images of turmoil and disillusion in which insects and humans collide. There is an analogy here that is interminable; dominate or die. To exterminate the irritant therefore becomes meaningless. A Kafkaesque style dominates exposing the tendency of the artist to identify with the underside of establishment. Nightmarish scenes, akin to the etchings of Spanish artist Francisco De Goya, are exquisitely detailed and establish early this artist’s skill.

Atrocities abundant and repugnant are rendered in appealing swathes of thick oil paint. The beauty of vibrant colour deftly handled mocks with delight as the conflict between admiration and repulsion collides. In our hyper-civilised world where social dilemma amounts to “how to cut down a bit of stomach fat” or is same-sex marriage uncivilised, carnage as depicted in the painting “Kibeho” is confronting. The Rwandan genocide reminds us that humanity is unhinged when mutilation and death are the requisite actions for differing belief systems. This image so graphic and disturbing, so beautiful and terrifying repeats undeterred.

In a parallel universe Gittoes could be the graffiti artist bringing alleys and lanes of the dreary end of the city to life. His enunciated depictions of humanity, affinity with gesture and realism and masterful use of hyperactive colour would assure him standing within this community. But for this artist acknowledging the absurdity of war and thus communicating that absurdity to an audience presently and pleasantly isolated from such carnage is his endeavour. The intriguing phenomenon of the exhibition is that while offering insight into the brutality of the human it conjunctly celebrates humanity. The essence driving this life of acute meaning to deliver what most are happy to never experience is recognition that we are human. Not white, black, Muslim or Christian but human.